I’m in my office, having one of those useless days due to things I am powerless against: 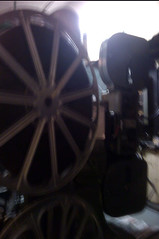 This is a very poor photo of Projector 2 with a tower reel, which is about five feet across and holds about two hours of film. Had to rewind one by hand during a blackout. It was not fun.

1. It’s guide delivery day. The cinema publishes a programme guide (in 16 page newspaper format) every two months. About 50000 copies were delivered to us this morning and all day, our delivery people have been stopping buy to load up their cars (or, in one case, granny cart, because he insists on doing most of his route on foot). I have been running up and downstairs to help them since I got in.

2. Related to this, I have to do a bunch of wee chores, like getting couriers to pick up more guides and promo stuff and making sure that businesses get their free passes for letting us make use of their stores to hand out these guides.

3. Our head projectionist and a outsider tech person are fixing the sound system on our projector. Again. “Bweeee bweeee bweeee bweeeeeeeeeeee” ad nauseam (almost literally). Even with closed doors, there’s no drowning that shit out.

This is the second time in about six weeks that we’ve had to re-align the sound reader laser thingos (I am all up in the lingo, yo). This is not because our projectors (all 35mm film still, BTW – more on that later) are olde and Frankensteinian (they basic bits are from the 1960s, but upgrades are made frequently), but, we suspect, because the very raucous construction of YET ANOTHER Shoppers’ Drug Mart across the street (on the site of a beloved and ancient deli) has been shaking the building so much as to throw the equipment off-kilter.

Fact: Even though I’ve worked here on and off for ten years, I have barely an iota of a clue how a film projector works. (This will become more and more apparent as you read on.)

Fact: In many movie theatre chains, the ‘projectionists’ don’t know either.

This is not just about upgrades to digital and running things off hard drives instead of film. We have big old reel-to-reel projectors, which 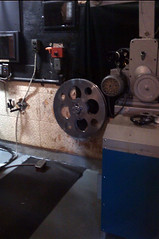 Not even sure why we have this. It's a platter reel. About three feet across. Holds, I believe, 20-30 minutes of film.

have become increasingly rare in the last 10-15 years. Instead of people who were apprenticed/trained (and, previously, licensed – Mike Harris did away with that in Ontario) to be projectionists, most multiplexes have a platter system. It uses a different kind of reel, mounted horizontally in slots in a upright rectangular system, and requires only that you hit ‘play’ and the machine does all the reel changeovers automatically. They are so simple that most booths, previous manned (or womanned) by a middle-aged veteran, can, for the most part, be run a high school student who has had a few hours’ ‘training’.

This is why a) sometimes a film at a multiplex will be out of focus for an extended period of time before it is fixed, because one person is in charge of a half-dozen (or more) projectors and may not know how to make the adjustments anyway and b) a film print we’re getting from another cinema today might not be ready yet (even though it played last night) because there might not have been a person capable of breaking down the film to its transportable size of reels on shift.

The digital thing makes projecting (or, as one of the minions here prefers, ‘projectioneering’) an even less skilled job. Pop in hard drive, hit play. Done.

Our head projectionist is, I believe, a third generation one, who didn’t pass on his skills to his sons because he knows the future is bleak. Our sub-projectionist’s father also dabbled in the field. They were both part of the union, both apprenticed for hundreds of hours, and are both very, very good at what they do. Both know their days are numbered. 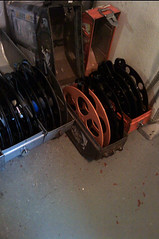 These are the wee (18 inch?) 15 minute reels in their cans (the film is on that tower reel right now). We ship them in these containers. They are heavy.

Fact (at least in my experience): Since almost the dawn of time, all projectionists have been potheads. Back in the day, vent hoods for projectors were perfect for smoking under.

Getting this cinema up to date with digital would solve a lot of our problems, like being able to book some things not available on 35mm (a more frequent problem these days), not depending on ancient, brittle prints for classic film nights, and these expensive repairs to our sound readers. But they are fucking expensive (still), especially for independent theatres with limited capital (our cinema’s still doing fine, but dropping many tens of thousands of dollars when we are about to get a new roof would be ill-advised right now).

And, and this is my point, really, it would also mean that some of the most hilarious, kindest, and, craziest (in a good way) people I know out of work, with no prospects of finding it elsewhere. They are both grateful every day that they still get to do this job that they (mostly) love every damned day. You can’t fight modernization and mechanization, but this might soon become the first time I’ve actually been (almost) directly involved in job obsolescence. A very scary thought indeed.

The only advantage I can see is that Euchre Night (I play with the two aforementioned projectionists and one from another indie cinema) might not all be projectionist shop talk. But it might be all about applying for EI benefits and panicking about retraining in one’s 40/50s instead. And that is hardly an improvement.

I can’t predict the future, so who knows? Maybe my friends will be employed in film until they can retire. But, hey, if you live near a wee independent, old school, film-based cinema, why not visit it more often? It might help keep a few of these folks employed for a little while longer.

4 thoughts on “A dying breed.”