My boss and I were reminiscing a bit about how the local paper used to be king. You could get pretty much all the information you needed about what was going on in your town, from local politics, to school events, to what sales were on at Freiman’s, to where to get a really nice dinner out, to wedding announcements, to, well, everything.

Now, not so much. For example, as I mentioned last week, there is no local newspaper film reviewer in this tiny hamlet of, oh, about a million people. The online edition and platform-specific apps for the main local daily do not have movie listings at all. People looking for information on movies are having to depend on Google and Flixster’s data harvesting to find out what’s on in town, and that’s a shame. Not because OMG MULTINATIONALS ARE EVIL, but because it draws even more people away from local media, so there’s no incentive to (re-)invest in local media because it seems unnecessary to do so.

I don’t think Facebook invitations and Twitter updates are as effective necessarily; I know that I get a lot of FB invites, but a helluva lot of them are blanket ‘I will invite everyone on my friends’ list!’ ones that I generally ignore because at least, like, treat me as an individual, and maybe think before you invite me to your friend’s friend’s band’s show in another town/country/hemisphere? And when it comes to movie listings, doing FB events or, if it were 1999, Evites would be ridiculous anyway.

So we print a program, shout into the ether that is social media (aka preaching to the already coverted), and hope for the best (meaning, we hope one of the CBC reviewers can make to press screenings and then like what they see).

Not that long ago, virtually every adult read a newspaper, often a local one, and not a readable-in-five-minutes copy of the Metro. EVERYONE had the information they required in one bundle of newsprint, the same information as everyone else, for better or worse. With everyone’s rapt attention, the newspaper could get local advertising aplenty, and had incentive to cover local events and news, and money to hire people to do said coverage. Sure, there are a few decent websites here and there that list local goings-on in Ottawa, but with the nationalisation of newspapers in this country (last week’s ‘Movies’ section online featured a review of a film that didn’t even open in town), a lot of that local reach has been lost.

We are inundated with information every day, but by reaching out globally in this infotainmentastic world (and goodness knows I am 100% guilty of this), we’re missing what is going on more directly around us, and missing opportunities to engage on a larger, local scale.

In other news, check out this rad ad from when the ByTowne was the Nelson and advertised in the paper every day, just like every other of the (dozens and dozens) of cinemas in town. 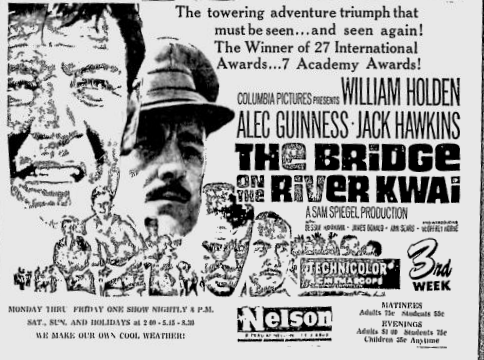 (This rambly, sleepy post was also inspired by there being no story on the main page of the Ottawa Citizen’s website on Saturday about the Queensway, the city’s main artery, having a major downtown section closed overnight for a major construction project. To remind the cinema’s patrons, I retweeted our awesome mayor instead.)

One thought on “Bosley Crowther.”