Back at the flat to eat a grilled cheese sandwich and have a beer that didn’t cost my (theoretical) firstborn.

I’m not sure how to collect/purge my thoughts on being back in one of my favourite cities, but somehow feeling very little human connection to it.

I did pass by where I lived in 1999, though. I was taking a few courses at the University of Edinburgh. (Open courses – I doubt a university this fine would ever accept me otherwise).

(As an aside, my first-ever Fringe show was Norman Lovett. He winked at me while I was waiting (first) in the queue. I was delighted.)

I will, however, tell you about why I don’t have a gamut of friends from probably my best summer: I was in international student housing. The only locals in my courses who weren’t ancient women kind of faded from my life as soon as classes ended, save for one, who taught me how to drink and appreciate whisky, and with whom I kept up email correspondence for a while, but then he went to East Timor to save the world or something. As one does.

ANYway, I lived with two Americans, and a Swiss girl. One of the Americans was a lovely Republican from New Jersey. I wish I had stayed in touch with her, even though she seemed to think Amnesty International was a socialist conspiracy (perhaps it is).

The Swiss girl was very odd, phobic of computers and animals, and didn’t socialise much, except for with someone else in the building who spoke Italian. One of the interactions I remember most was when, after an orientation evening of haggis (of course) and whisky (duh), some of the group decided to hike up Arthur’s Seat. I was going to opt out, thinking it was a poor idea for a desperately out-of-shape tipsy klutz to be taking that on. Simona would not let me not go.

I literally had to prevent her from falling down the hill several times. I may have saved her life, or at least her bones.

She also was once walking on the Meadows with the NJ roommate and they came across a woman with a tiny Maltese on a lead. NJ roommate said ‘Aw, what a cute dog!’

Simona, in all seriousness, replied ‘Dogs are savages.’

The third housemate was a sorority girl from Georgia, going to school in Virginia. She was a treasure. I was utterly bewildered by her, because it was like she was from another planet. Among the things she said and did:

1. Went to TGI Friday’s (which seems to be gone now) at least once a week because it was the only place she could buy a whiskey sour. She was very upset that pubs would not make them. WHISK(E)Y IS NOT FOR MIXING HERE.

2. Would exclaim things like ‘You know what this country needs? Newspaper delivery!’ I did explain to her that they did, but didn’t add that USA Today wasn’t one of papers available. It’s all I ever saw her read, and maybe three times over two months. She was annoyed it wasn’t widely available in shops either. She also wondered why there wasn’t a local laundry service that would wash and fold for her. (There might have been, but we were fucking STUDENTS and WHO HAS MONEY FOR THAT? I bought a bucket to facilitate handwashing, for crying out loud.)

3. Taught me the wonderful phrase ‘I love her to death, but…’ If she started a sentence with that, the person (usually a sorority sister) being discussed was awful and/or an idiot.

4. She could have told one of her stories with a ‘I love them to death, but…’, because her sisters set up a dunking tank at a college fair to raise funds for a local women’s shelter and had t-shirts printed up with ‘Hit me baby one more time’ on them. They realised their mistake the day before the event, thank fuck.

5. She had a twin sister, who was doing a similar open course thing in London. An identical twin, who went to the same college, and was in the same sorority. ‘No one can tell us apart! It’s been like that OUR WHOLE LIVES.’ Yeah, no. Not at all. They looked like sisters, but from the first photo I saw, I was biting my tongue trying not to ask ‘Do you know what a fraternal twin is?’ and/or ‘Do you realise that your family and friends have clearly been bullshitting you for 20 years?’ Chrissy and I rolled our eyes a LOT when said sister came to visit for a weekend.

Yeah, we didn’t stay friends. I have for years tried to figure out how to write a comedy sketch based on her, but have failed. More’s the pity.

So yeah, I don’t really know anyone here. I mean, I said hello to Mark Watson after his shows, because I’ve met him before, and had a nice chat with my flatmate (a retired teacher from Vancouver) this morning, but y’know, there’s not that humanity that I should probably want or need. It’s a bit lonely so far. But at the same time, if a pile of money dropped into my lap, I would still move here in a heartbeat. I mean, have you seen this fucking place? 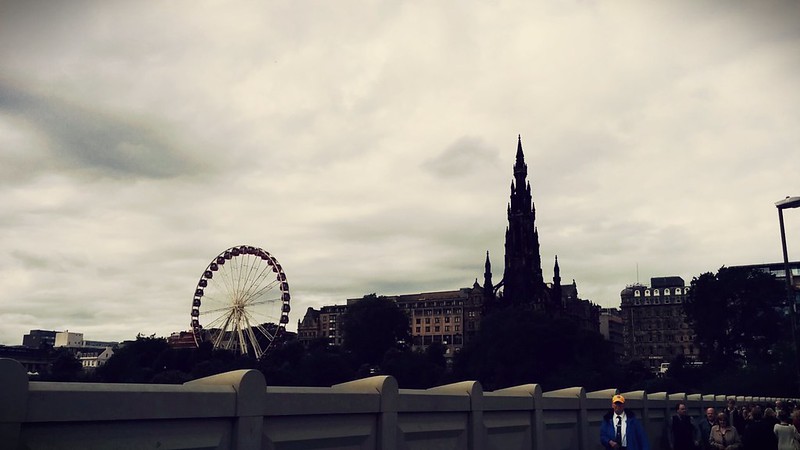