I think that many Canadians of a certain vintage are definitely naturally a little bit anglophilic. The other day, Caitlin Moran tweeted a photo of her husband holding a vintage WH Smith bag and I squeed a little bit. Those were ubiquitous when I was a kid, before WH Smith was absorbed by Coles and then Chapters/Indigo gobbled up the pieces.

Sure, there are ‘Smithbooks’ branches here and there, but it’s not the same.

One of the Popcorn Monkeys (thanks, Anja!) is just back from holiday and very generously brought me this awesome gift, which I am sharing with the staff, so I don’t just sit and scarf all day long. 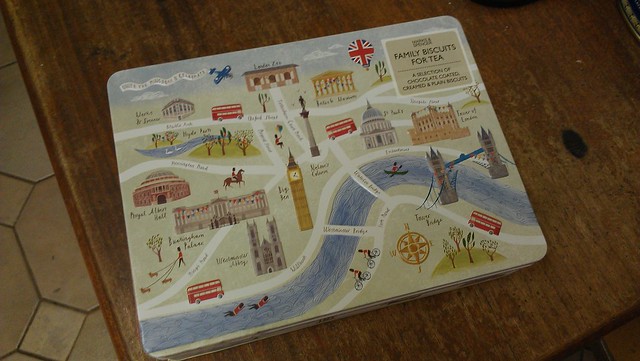 British readers (all one of you – hi Joe!) will perhaps scoff and say ‘so? weren’t you just in London last year?’

Yes, but this box didn’t come from London.

It did not even come from the U.K..

Y’see, the Czech Republic has Marks and Spencer.

We did. We used to buy my grandmother cardigans there sometimes. Or dare each other to eat cheese and onion crisps because no such weirdness was made by Hostess or Yum Yum. Or buy jaffa cakes before they were available elsewhere. They weren’t megalo department stores like on many U.K. High Streets, but they were awfully fun and charming to go to.

This was long before I ever went to Britain, but I adored that place all the same, like a homesick war bride. They packed up shop more than fifteen years ago because we (apparently) weren’t a viable market anymore. I found this awfully upsetting, even though I only went in there a couple of times a year. Where were my friend’s Welsh parents going to get their frozen steak and kidney pies?!

Very occasionally, a box of M&S tea or some rich tea biscuits with St Michael’s branding shows up in Loblaws, but not with any kind of predictable regularity. There’s a lovely familiarity to seeing it, even if they are highly priced beyond reason/my wallet.

When I finally did go to the U.K., aged 22, I was delighted by what the ‘real’ M&S’s (big and small) were like.That’s where you could get a nicer sandwich, if you had the money, than at Tesco. That’s where, once in a while, I would splurge and buy real Devon cream, from actual Devonian cows, to have on my cheap-ass Kwiksave scones. That’s where I bought most of my groceries (in Paddington Station) when I took a week-long course in London because I was too tired to track down somewhere cheaper. That’s where, to this day, I buy most of my underwear (by mail-order) because that shit’s solid. Man, I love that place.

Where did they go? WHY did they go? How could they not make enough money to survive in the land where ‘Coronation Street’ is still a top-rated show? Where ‘Are You Being Served?’ as been on perpetually for 40 years? Where we still celebrate Royal Weddings with stamps? We love twee Britain more than almost anywhere I can think of. I feel like the Mothership cut us off from an important resource.

Of course, I miss Boots most acutely.

A few years ago, I told my friend Chris (whom I met in Edinburgh in 1999) that the first thing I do when I arrive in the U.K. is stock up on toiletries at Boots. He thought that a) ridiculous and b) really, really ridiculous. ‘It’s just Boots.’

Boots is WONDERFUL, people. Their store brand stuff is occasionally available here, at a premium, at Shoppers Drug Mart. They had bargains on bloody everything. Their Advantage card saved my bacon a couple of times when I was out of soap and broke as fuck in Birmingham. They’re cheap-o baby wipes are the best tool ever for a tourist faced with TFL in the summer time (wipe your face and neck down every couple of hours and those things would be black with ick). Man, Boots. So great. I wish I had some access to 17 nail polish right now. That stuff wasn’t too pricy and rock solid.

Also, I have childhood memories of it. Boots hasn’t existed in Canada since 1989, but there was one fewer than three blocks from my first house. It was a ‘big’ adventure to go there when I was five or six because one had to, gasp, cross Holland Avenue (where there were TRAFFIC LIGHTS) to get there. We went there a fair bit because it was closer than the IDA – which was SO FAR AWAY comparatively (about five blocks). To be honest, we may have only gone there because my dollar of allowance no longer bought me two Aero bars (one plain, one mint, one for immediate consumption, one for later) from the rip-offy corner store, but I could still manage to afford the same at Boots.

Oh, Boots. Your logo still makes me smile to this day. The moisturiser I’m using post-shower today came from there. I stocked up last November. I am running low. I will have to go back soon.

Anyway, as a walking, talking anachronism, it pains me that none of these retailers really lasted beyond the 1990s in Canada. Surely, there are others still wistfully dreaming of a time when the biggest non-American foreign retailers in the country weren’t Swedish? Now’s an ideal time, particularly for M&S, given our increasingly elderly population, to come back. I am now feeling very old and bereft and slightly homesick. It’s time to reinvest in the colonies, British retailers! The Czechs don’t need your love, we (I) do!

—
On a related note, a cake shop in my neighbourhood is making strange claims. 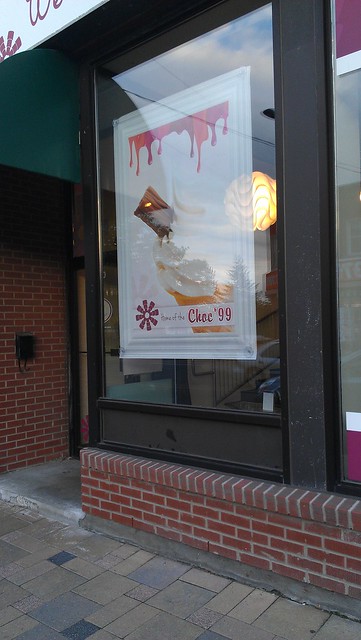 In case it’s unclear (the employees were staring as I tried to take a sneaky picture), that is an ice cream with a Cadbury’s Flake (or knock-off) stuck in it. This shop is purporting to the be the home of the ‘Choc ’99’. That’s just a fucking 99. Best served from a van near Hove, in my experience. Don’t pretend you invented it.