I see from my bloglogs that a few non-L0ui5 Vu1tton spammers have been checking in semi-regularly, so maybe it’s time for an update.

Well, I have been in a state of panic virtually all week. Work is a respite, except for I’m dropping the ball, burning bridges, smashing eggs, and generally being moronic, so I’m stressed about being useless here too.

The contractors and plumbers had a dispute yesterday (someone was lying to someone about something, but I have no way of knowing who it was, although I have my suspicion), but now that the plumbing’s done (!!), I no longer (hopefully) have to worry. At least about that. Drywalling starts Monday.

Anyway, we moved into a hotel-apartment on Sunday, which, well, went OK-ish. Hamish sat in my lap (in the backseat) for the car journey and wasn’t very howly at all. Probably because he knew something superbig was up. He has not been impressed with anything that’s happened since. 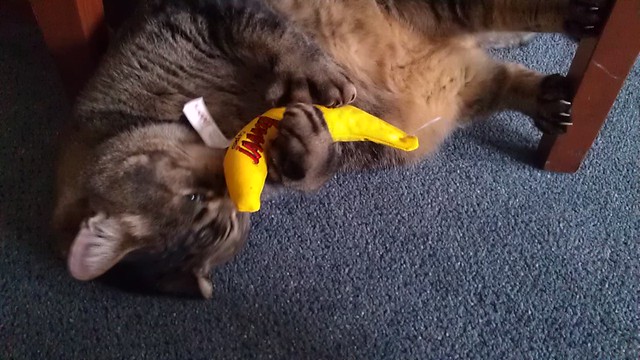 Despite the in-room laundry, ‘living’ about four blocks away from work, and people cleaning up after us (a bit), the novelty of living in a hotel-apartment wore off almost the second we arrived. Here are some reasons why:

1. The smoke detector has gone off for something as innocuous as making toast. (We have a work-around for that now.)

2. There is carpet everyfuckingwhere. Well, okay, not quite, but close enough. Hamish’s litterbox is in an uncarpeted laundry ‘closet’ and there are little bits of litter tracked all over the place. It’s gross (even though it’s mostly the cleanish, unclumped stuff). It means the Scary Vacuum Monster has to come visit more often, sending the cat into a tizzy, and making him scared of Weebro and me because, frankly, we can no longer be trusted to make good decisions on his behalf.

3. We did not bring enough condiments and spices, and investing in such things seems a waste.

4. Similarly, I hate all the clothes I brought, but can’t afford to buy anything else, and can’t really get into the house to get alternative accoutrements.

5. The cable at the hotel is lamer than at home, and there are no ‘fun’, new-to-us stations to enjoy, unlike when you go to another city and suddenly have access to a Monster Truck channel.

6. The TV in the living area is disabled for hotel life (and as one of those dinky, minimally buttoned hotel remotes), so though the aspect ratio is set to turn everyone into Mike Duffy (™ my hairdresser Al), I can’t do a damned thing about it. Even the buttons on the TV itself do not work.

7. I find it hard to socialize because there’s nothing to do at the apartment, but I don’t want to go out much either. So, if anyone wants to visit and watch me stare at the walls, let me know. I do have beer.

8. I am sleeping terribly. That’s not necessarily related to staying in a hotel, but the locale is definitely not helping. Especially since I’m in the main living area instead of in a room with a door AND the detergent/industrial tile cleaner they use to wash hotel sheets has made my face itchy as fuck. (I’m wrapping a t-shirt around each of my pillows tonight.)

9. Following from 8, a good snooze is made more difficult when a fretful cat whimpers pitifully at you several times a night. He’s at the stage, which Richard explained to me based on his experiences babysitting his mother’s cat, where, although he was okay(ish) for a few days, believing the situation temporary, he is now panicking in case this whole thing (including the Scary Vacuum Monster and children running in the halls) are going to be a permanent part of his life. I can relate.

9. I feel like I am bleeding money* and I have a feeling, based on other people’s experience, that the insurance company won’t pay quickly.

Here is some good news, though: I’m having a burrito for dinner.

* Plumber called, said the job was done for estimate price, and, of course, added ‘And how are you paying for that?’ Was tempted to ask if he’d accept cinema passes and a two-four of Ex, then throw in all the spare bicycle parts from the garage as a bonus.