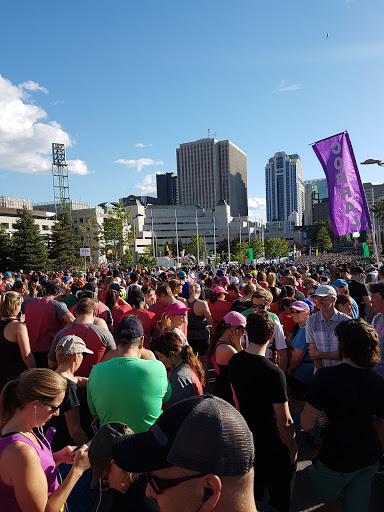 Yesterday, I ran a 10K. I was meant to be running the Race Weekend half-marathon today, but I decided, late in April, that instead of running disastrously slowly and risking serious injury to body and mind, I would run a shorter distance only a bit slowly (compared to most runners, not the elite super athletes who finish by the time I hit kilometre 3).

Training never goes as well as I expect, despite years of trouble with follow-through, especially after Bike Commuting Season begins, and I need my leg and lung power to get to work.

But the race went fine! The first half was the fastest 5K I have done in, literally, years. The second half, not so much, but still fine! 1:07 and change is totes fine!

But then I remember that last December, I was signing up for what I hoped to be a sub-2:15 half the week I turned 40.

But I then swing back quickly to ‘YOU ARE TOTALLY FINE’ and realise that, actually, I feel really good? I am a bit sore, sure, but my race recovery at R.’s (he lives near race starting and finishing lines, so his apartment is often my storage locker) was just long enough to down a smoothie and a muffin before biking home instead of languishing for hours, as I did last year (in fairness, though, it was 35C+ and 1374% humidity last year). But my shoulders aren’t made of rock, my hips aren’t screaming at me, and, despite a mondo wine and cheese binge on Thursday and ALL THE PIZZA on Friday, my stomach is not in tatters. (I did get heartburn DURING the race though, so, y’know, I still wouldn’t recommend either as a training strategy.)

The difference is probably because of two things:

But, of course, it’s not all sunshine and roses and a blog entry here is nothing without more lists and crabbiness.

Good things that can get me crazy emotional even though this is ‘just a run’ sponsored by a corporate entity:

So yeah. Will this be my last race ever? Naw. Will I train better next time? Maybe. Will my running mix always include ‘Queen Bitch’? You betcha.

—
In other news, I had another Jeopardy! audition/interview last month (longtime readers may know that I had one in 2013). I will know some time between now and December 2018 whether I make it on the show. They did not ask me about my ‘Going to the Wrong Polish Crooked Forest’ anecdote. Bah.