This will tell you a lot about me:

Last night, I stayed at work until 7:30 rather than go home before heading to a birthday party, because I knew it would be nigh impossible to get my butt back out the door again. I met Richard at his coworker’s wife birthday party (hey, Ian, if you’re reading, I finally went to the Lookout!), had one drink, then went to Phil’s birthday party at the Kent Legion, hung out with ye olde ByTownians, reminisced about a Cardigans show 11 years ago with a friend-of-friends, watched a bit of Phil’s showreel, and made the fatal mistake of eating largely icing-based cake with a Labatt 50 chaser.

I was still home and hugging my pillow by midnight, which was my goal.

In both cases, we got the “you’re leaving already?” sad faces. In both cases, the celebrants were 50 (or older). Even Phil’s tiny, ancient mother was still dancing (in her chair) when I left.

Sad? Pathetic? Oui, un peu. But I was frickin’ tired and nursing a cranky stomach (again, cake + booze? not a wise move if you’re already not feeling so grand).

The good news is that Phil was genuinely surprised (even though he knew his girlfriend was planning something, he was totally convinced he was helping her with one of her charity events that night) and wasn’t angry (my biggest fear). He was having a great time.

There were about 50 people there when I went home, with more arriving later.

Also, they played the Go-Go’s, which makes any party better. As does an impromptu Matt/Phil wrestling match, for old time’s sake. 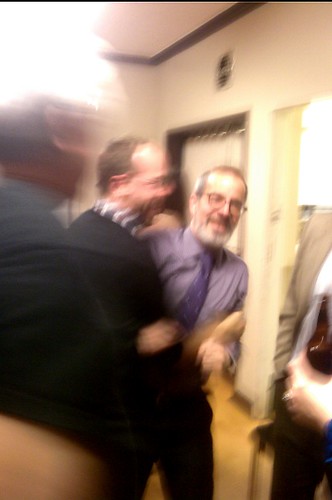 —
Today’s words of wisdom come from Piotr, on the subject of Polish roads:  ‘Street lights are for little girls and Belgians’

One thought on “Friday nights.”