I’ve mentioned it before, but sometimes smatterings of hipster douchebagism creep into my life. Sometimes, it’s intentional, like when I eat a stupendously priced, locally sourced artisan donut, but often it’s because something is nice and I’ve liked it a long time, like Mason jars. My mother was a big fan (and wrote a paper on them for an Industrial Design class, even) and I am a smidge obsessed and have been storing most dry goods/drinking beer out of them for years and years and years.

I also frequently use them to bring soup to work, mostly of the potage-y variety, but this week I have been craving faux pho – what I call any vaguely Asian-y noodle soup. But noodles doesn’t transport very well, unless one likes mushy pasta a great deal, but I came up with a solution: Three Jar Soup, which I made yesterday. 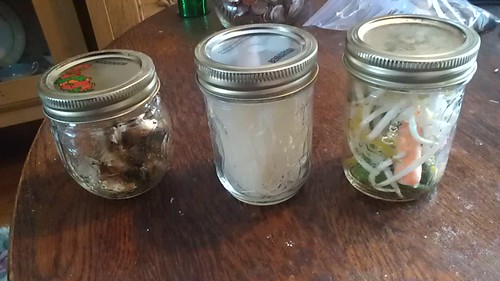 These three jars, assembled at home, contained the ingredients required. 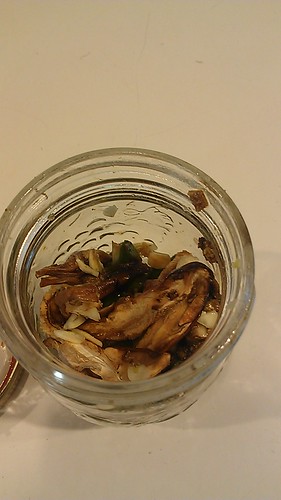 At work, I topped off jar #1 (which is wee, but I can’t remember how wee in mL terms), containing dried shiitake mushrooms, half a bouillon cube’s worth of powder, a grated clove of garlic, some grated fresh ginger, a splish of toasted sesame oil, a splash of tamari, and a squeeze of lime juice with hot water straight from our coffee machine. 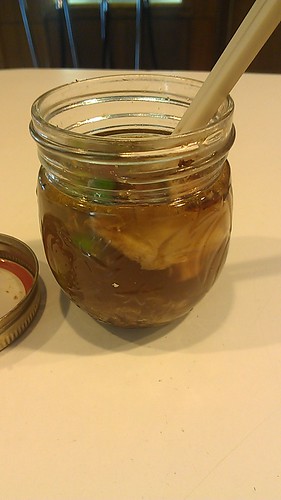 I then stirred it together and dumped it into jar #2 (a 250 mL jar), which contained uncooked rice vermicelli. I added a bit more hot water, then let it stand for about three minutes. 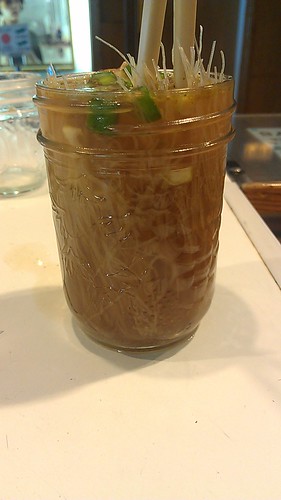 Jar #3’s contents (some previously frozen veg and some bean sprouts) were dumped into a bowl. The contents of Jar #2 (which, if you’ve been following, you know also contain the ingredients of Jar #1) were poured over it, along with a Jar #1’s worth of more hot water, and mixed a bit. 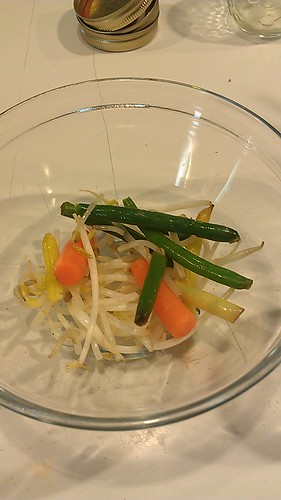 At this point, I realised the noodles weren’t quite cooked and the broth was cooling fast, so I bunged it in the microwave for about a minute and let it stand for another two minutes. I imagine that if one had a thermos instead of a jar for part #2, things might progress different. BUT I DIDN’T HAVE A THERMOS WITH ME. 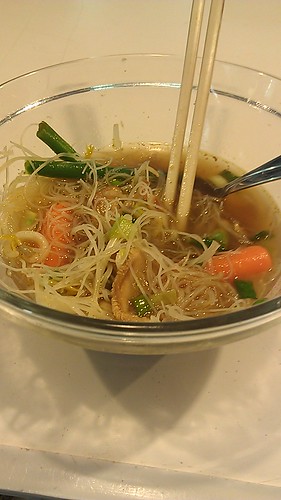 After nuking, I stirred it more and ate it. And it was good. And would do it again. Most non-allergic folk would probably also include a generous dollop of sriracha too. Unless something else has usurped the cock sauce for dominion over hipster palates. I don’t know, ’cause I’m not that cool.

I am going to do this again tomorrow, perhaps with more sprouts and slightly different veg. Maybe you should try it some day too.

UPDATE from after Thursday’s lunch: Today’s version included crushed wakame seaweed, which worked pretty nicely, and no lime. I’m thinking miso instead of stock powder for next time.