(Apologies for the greater than usual mess. Wrote a rant, was corrected about something, and now I can’t proofread my updates in a way that makes sense in English for some reason. Will try to clean it up more later today.)

Movie ticket are hella expensive. One of the excuses used is that movies just don’t make as much money as they used to, in part because marketing is expensive. When studios say they can spend tens (or hundreds) of millions of dollars on marketing for a movie, they aren’t lying. And it’s not just all the ads that give away the best ‘splody bits of a blockbuster, or the heart-wrenching, but tv-friendly bits of Oscar bait, nor is it the Happy Meal toys, nor even just the posters and press tours. 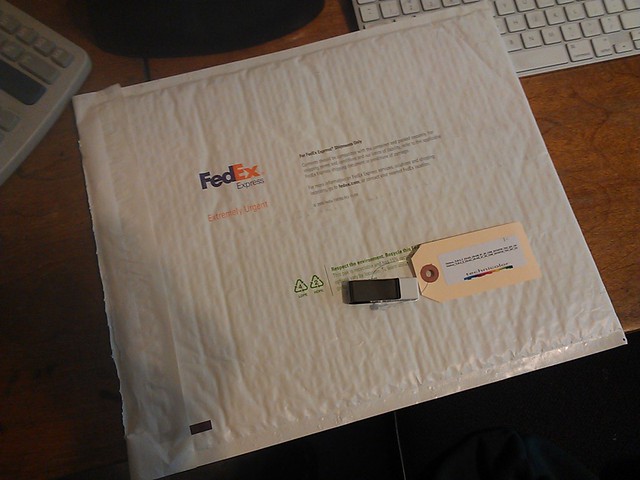 ‘This’ is a USB key with two movie trailers and the envelope it was rushed to us in. Total cost to the distributors of the film? An estimated $15-20.

So, big whoop? Publicity material for an independent theatre is good, right?

This is for a movie that we are not playing for four months, so why the rush?

Almost every week, we get even less useless trailers (most recently, one for a film that we had played in rep twice previously over the last few months and for which we had had the trailer since about March), sent by expensive courier.

We were also sent stand ups for Smurfs 2 and the Twilight franchise, which were only good for pranks.

We are also sent dozens of duplicates of posters for movies we have already played, sent overnight by courier, for no reason at all.

So, let’s say a package like this cost $15 (USB stick + FedExing). If it was sent to even just the cinemas in the Ottawa area, that’s $315. For one largish city.

Imagine if it was uselessly sent to all cinemas in the country, or North America. That’s a lot of dough. Often, these kinds of things are not for a big blockbuster-y film (sometimes we get ‘rushed’ things for, like, Expendables 8 or Marvel Presents That Other Superhero*, which, yeah, maybe sending to everyone isn’t that dumb). So, generously, maybe 5% of cinemas needed it. That’s a fucking waste. A fucking expensive waste.

Imagine this three times a month. That adds up right quick. Would pay for quite a few targeted tv ads.

But publicity folk just throw shit at theatres and hope some of it gets to the right place instead of, y’know, carefully considering focussed marketing at the cinemas that are actually playing their stuff.

Of course, conversely, because we’re a weird little indie cinema, sometimes we can’t get posters and trailers at all, because marketing outside of Toronto/TIFF Lightbox isn’t a priority. Or because there is actually no publicity campaign outside of Quebec for French-language movies.

*A film I would go see in a heartbeat.