(Yep, back to blogging every day. You can subscribe to an RSS feed or email update list if you want to know when these go up, but are not on Twitter.)

Probably used up my writing mojo for today in a handful of terrified tweets/FB updates after Hamish (who was collar/bell-less because he seemed to be scratching his neck a lot earlier this week) woke me up by playing with a mouse (which he helpfully brought upstairs for me).

I pulled him off the poor creature, which then escaped, limping, under my bed. I distracted my beast with breakfast. Put Hamish’s collar back on. Went to find the mouse. Saw no sign of it. Worried about finding it later. Decided coffee was necessary first.

Hamish didn’t think that was good enough, because he bolted upstairs, found the mouse, and dropped it in the dining room, where it stood, paralyzed in terror. Hamish just stared at it, expecting it to move (he doesn’t see mice as food, just moving toys, because he is a spoiled brat/catfail). It did not. But it was not a mousecorpse. Phew. I managed to nudge it into a box and carry it outside, where it scarpered.

Everything about this story is probably a big ‘EWWWWWWWWWW’ or ‘AGH! Why didn’t you let the cat kill it?! Or kill it yourself?’ to most of y’all. Maybe I’ll die of hantavirus, but, for now, I’m content to having an annual (or, usually, even less frequent) rodent sighting. There was a giant storm last night which probably coaxed the creatures who live under the porch indoors. Obviously, I don’t WANT them in my house, but not enough to commit a mass mouse murder.

Despite feeling like I’ve been hit a truck, I’m kind of proud of my elderly feline friend. It’s been a long time since he’s caught anything bigger than a cricket. It’s nice to know that he’s still got the skillz, even if he doesn’t know what to do with them. 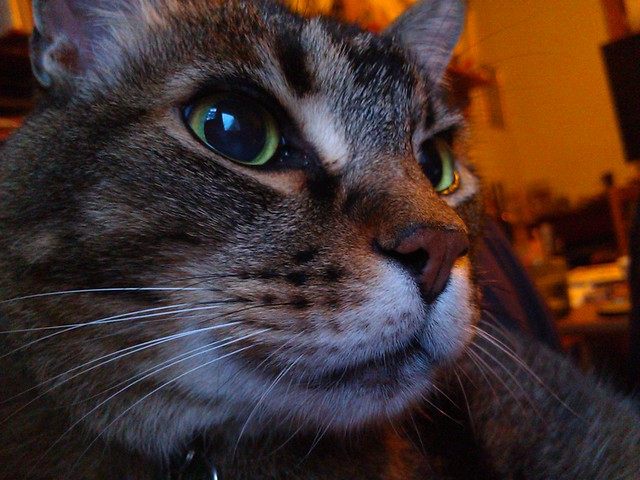 Soul of a (failed) KILLER

(Of course, he knows the mice is outside and is yodelling to be let out himself. Sorry, neighbours. Also, apologies if y’all were woken up by my yelling ‘What the FUCK Hamish’.)