I spent my last night Poland eating a massive bowl of pasta, drinking Chilean wine, and watching Gentlemen Broncos (off a laptop) with friends and their cats. I wouldn’t have changed a thing, except for the dozens of attempts at sinus clearing with rough Polish toilet paper.

Y’see, the first 8 (!) days of this holiday were hugely buffered by friendly faces. I’ve travelled alone before (always in the UK), and been fine, but heading into the ‘unfriendly’ stage seems awfully daunting at the moment, possibly because I’m feeling miserably full of snot. The resentful glares from the other women in this compartment aren’t helping.

I wish (kinda) that I was one of those people who could make friends wherever they went, but, really, my generally loner-y behaviour and disdain for most people (kidding – I’m mostly just shy) makes it difficult. The fact that I’ve sworn off youth hostels (FIE ON YOUNG PEOPLE) makes it trickier too. I don’t initiate conversations with random strangers (aren’t they all?) easily either. So, despite the lack of a crippling language barrier from here on in, I might still be semi-mute until I get back to Canada. Unless anyone wants to hang out near Heathrow next week?

Anyone remember that plan to see a movie in every country I visited? Well, the Neptun in Gdańsk, a Soviet-era cinema in the Old Town, doesn’t really show movies much anymore (except festivals). Luckily my translator (Piotr) conveyed to the old woman working the cash (they have smaller rooms with regular chairs where they do show some regular films) that I managed a cinema in Canada, she let us in to take a look around. My camera had a bit of a hissyfit with the light levels, so these shots aren’t great. My apologies. Still, very cool to get to see it. I guess I have to find a ye olde cinema in Berlin too. And maybe even see a film in it. 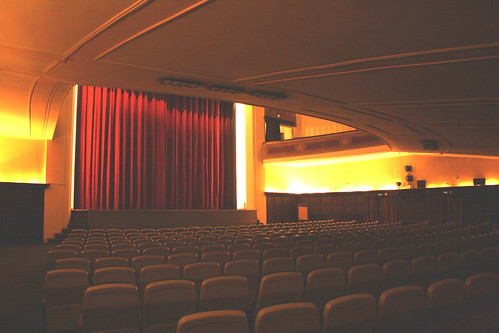 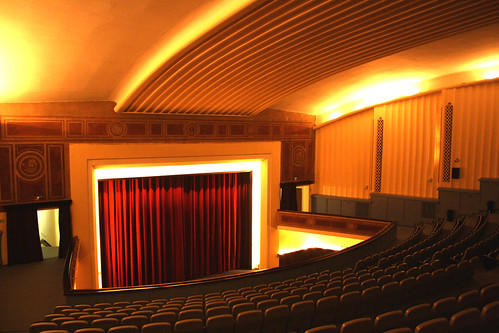 Seriously, this place is huge. The ByTowne holds 670. 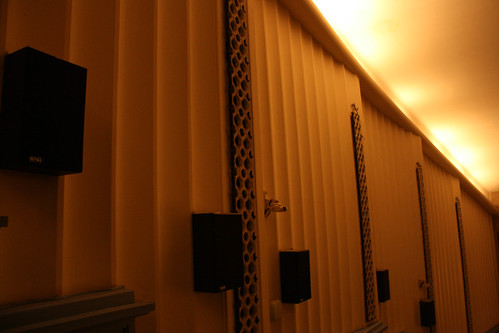 I think the speakers might have been behind those funky decorations before. 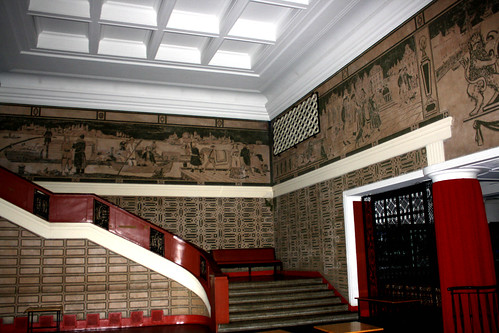 This lobby has amazing murals on the walls. 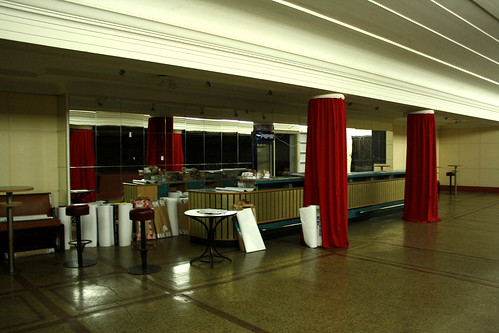 I have no idea what they normally serve food-wise, sadly.

(Written much later)
Now on the sehr luxurious (comparably) EuroCity Warsaw-Berlin Express after an unexpected 4+ hour stopover in Poznań. Turns out that RailEurope was working from an old PKP schedule – my train was due to come in at 14:05 (per RailEurope), 14:26 (per PKP), but actually came in at 14:38. My original train from Poznań to Berlin left at 14:23. I had to pay 16 zloty to make the ticket change (about $6).

Poznań Głowny is slightly better than many stations I’ve seen, but really, spending an afternoon there is not recommended.
Some things that happened:

As I’m getting very late, I think I’ll stay in tonight. But, really, the worst thing about right now is that I only have one Kleenex (sorry chustczki higieniczne) left.

PS (20:40) I was not in Germany. Rzepin ain’t no German name.
PPS (20:48) Now apparently stuck in Rzepin. I wonder if this has to do with the sheepish guy being led down the train by the guards earlier.
PPPS (21:02) Oderbruck! Guten Abend, Deutschland!
PPPPS (21:12) Hm. This train’s okay, but the commuter trains in Frankfurt (Oder, not am-Main) look like spaceships compared to this thing.

5 thoughts on “Is this a blackout or am I losing my sight? (Not about gardening.)”