I had meant to do some neat-o, modern trickery to tilt-shift the hell out of this photo ’cause I have an app for that. But said app requires some skills that I do not have, like deft fingers and patience for pinching and expanding. 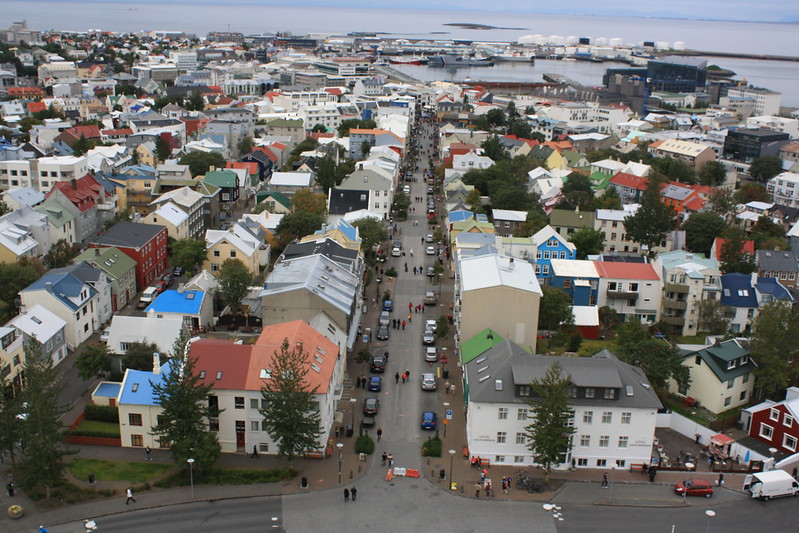 That is Reykjavík from Hallgrimskírkja (which autocorrect wants to turn into ‘Buckinghamshire’, ’cause sure), looking towards the harbour that gives the city its name (Reykjavík means ‘Smoky Bay’*).

I’ve started reading the Saga of Icelanders, by which I mean I’m reading the lengthy-but-fascinating introduction. Excited to get into the actual stories soon; they are novel (har) in that they are almost naturalistic and modern, particularly when compared to contemporary literature (Dante, anyone?) in the rest of Europe. Also, apparently, everyone is very blunt and earnest, saying what they mean, so even someone who occasionally has a little (or a lot) of trouble with literary nuance and symbolism should (??) be able to understand it all. I wonder if there are fart jokes, like in Chaucer.

Also interesting is that the Icelanders have this amazing early literary tradition, and the oldest parliament in the world, but didn’t really have roads until the 20th century and has few buildings more than 50 years old because they used up all their trees early on and therefore couldn’t build good frames and foundations in the face of earthquakes and such. A fascinating shift in priorities and specialities compared to so many, which I dig.

Time for tales of seafaring, sheep, and elves. Or maybe just sleep, where I can be a Viking myself.

* Coincidentally, the other place I vacationed in, Edinburgh, is also known as Auld Reekie, meaning ‘Old Smoky’. No wonder my breathing has been messed up since I got back.