(Holidailies #9)
I’ve noticed a lot of tight, acid-washed jeans (or acid-washed jeggings?) in the last few days; so many that I fear they are a THING again rather than just an ironic commentary on something hipsters think is important.

However, it did remind me of that I had this photographic evidence of my own dalliance with The Evil, Tainted Denim, which makes me laugh every time I see it. 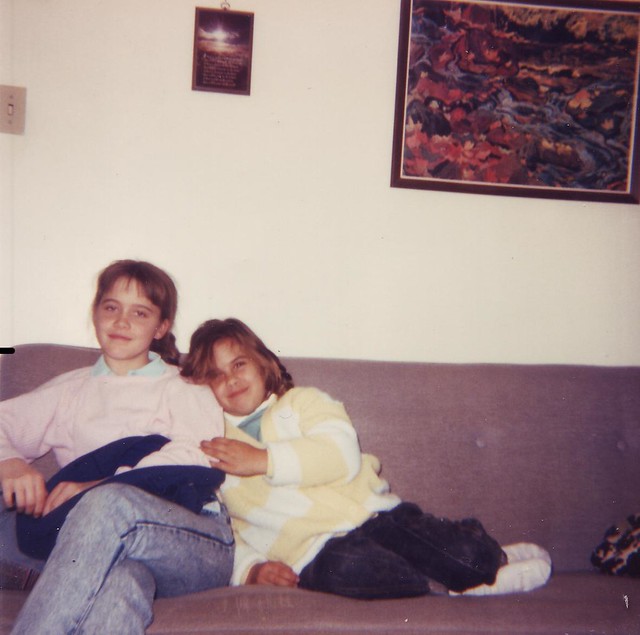 My tiny cousin Julia is now an Oxbridge-educated professor. Pre-teen me was far less impressed with her even more pre-teen self back then. Smug ‘I’m, like, SOO over life’ face had been nearly perfected. I also look a lot like my older brother here. Those things might be related. Nice Jesus-y quote on the wall of Grandma and Grandpa’s den, too.

I remember these jeans really well because my mother thought they were criminally expensive (but I neeeeeeeeded Levi’s) and catastrophically ugly. Right on both counts, Mum.

Why I paired them with a polo under a sweatshirt, I may never know. But this was probably taken in 1989, and, really, we were all guilty of looking ridiculous back then. I was probably wearing them with ratty Reebok high tops when I was outside.

This marks one of many brief attempts at being cool. This one was particularly brief as this was mid-growth spurt (check out the crazy long legs already). Within a year, I was not only nearly full adult height (I think I got to 5’8 – for reference, my cousin in the photo has topped out at 4’11). Within about three weeks of buying these jeans, my hips were too big for them. Hell, I could barely squat in them IN THE STORE. (‘No, Mom, they’re totally fine, I swear!’)

(These were 27″ inch waisted jeans. Why I still remember that, I have no idea, but it makes me laugh when I go into stores and see how feckin’ small that is. I thought I was enormous back then. Nope, just tall and pubescent.)

It really is a shame how image and label-conscious 12-year-olds can because it’s a really stupid time to buy them anything that isn’t disposible. We should just issue them with old-fashioned potato sacks and be done with it.