As much as I love Scotland to my very core, I am no Scot. I have some Irish blood in me too, but I am not going to take up playing the bodhrán. I get very confused by people who embrace even the most tenuous links with their Gaelic roots in obsessive ways, probably because my family’s been in Canada too long, doesn’t live in Cape Breton, and because I’m mostly of German descent anyway (and, as we all know, displaying German pride was quite unfashionable in Canada in the 20th century). If one doesn’t grow up in a culture, it’s hard to understand it. But I’m with Billy Connolly on the bafflement Highland Games and Scottish Pride events abroad can induce; his Scottish childhood did not include anything like those things. Almost no one’s did. Besides, the idea of Scottishness that most people have comes from Queen Victoria rather than actual Scottish tradition. That’s probably a rant for another day, though.

What is bugging me today? Celtic bars. I’m not talking about somewhere that actually has 80/-  or Harp on tap and decent fish and chips, or even the ones with Celtic-ish bands playing. I went to an Irish bar in Oban, which is on the West coast of Scotland, because the idea amused me (it was no different than any other pub in town, really, aside from the name and a couple of shamrock decorations). There is an Irish bar in Reykjavík, in Kraków, and probably in La Paz, Vladivostok, and on the Moon. Richard worked in one in Paris. They had good sandwiches, apparently.

No, I am talking about the places that throw miscellaneous clan information, conflicting football scarves, and pictures of Her Majesty on the walls, then serve up things like ‘Bruschetta of the Highlands’ and ‘Dublin Burgers’ (if it has Dubliner cheese, that’s one thing, but if it doesn’t, just call it a burger), things I have seen on menus in my own city. Are you out of your fucking minds? The place I went to yesterday, which was not in a tourist zone, so, really, there is no excuse for this kind of ridiculousness (I mean, folks still go to Hard Rock Cafés, but only when on holiday, right?), had these choices: 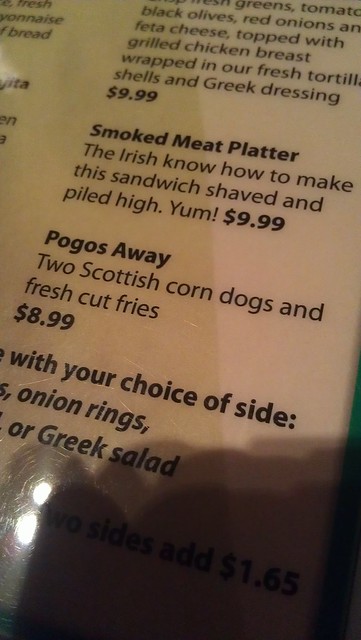 I’ve been to two places recently that had nachos, one named for a city in Ireland, one for one in Scotland. I have had nachos in a pub in Scotland. They came on BBQ Doritos. Just call them nachos, unless, like, the chips are made from oats and the meat is haggis. Also, don’t do that.

Anyway, here’s an invitation to share stupidly, rather than cleverly, named menu items you’ve come across, not necessarily in Irish or Scottish (or miscellaneous ‘Celtic’***) bar, but anywhere.

Also, where are the best fish & chips in central Ottawa? The Glen is great, but might as well be on Mars when one doesn’t always have car access.

—
*Of course, the Scots do like a deep-fried sausage, but a Pogo? Hell no.
**Seriously, why haven’t these caught on here?
***When’s Ottawa getting a Breton bar? Never mind, it’s probably already in the works.