Three posts a week proved too much for now, apparently.

One complication is that I had a previously descheduled meeting for a group project rescheduled anyway, necessitating some scrambling, and resulting in much doubt (turns out my work is probably duplicating a study from, oh, 20 years ago that I can’t seem to find).

In the end, the meeting was fairly pointless, as a technical hiccup meant that the Skype call with our project liaison didn’t work out. I’ve emailed them, but am waiting for a reply on how to proceed.

But, after a winter smugly not getting sick, even as two flu-ish plagues and a stomach bug hit most of the cinema staff, the stress of this week, and life generally, and hanging out with sickly trivia folks who were, apparently, not as ‘not contagious’ as they thought they were means that my immune system has finally given up, and is battening down the hatches by filling my head with ectoplasm and sending a cavalry of razor blades down my throat.

So, nerds of Ottawa who are planning on spending tomorrow doing research at Library and Archives Canada, as I hope to be doing (as soon as I know that my attempts at gathering information from clearer copies of this kind of thing are worthwhile), I will try to keep my snorting and coughing as contained, and quiet, as possible. And I’ll bring Purell to wipe down the microfilm machines afterwards too.

What’s LAC policy on napping? I’ll bring my own blanket, if I need to.
—

Here’s some good news in trying times, the lovely Jack Monroe won her case against one of the vilest humans alive! YESSS.
—

Here is Bea, doing what she does best (aside from pulling clothes off the drying rack). 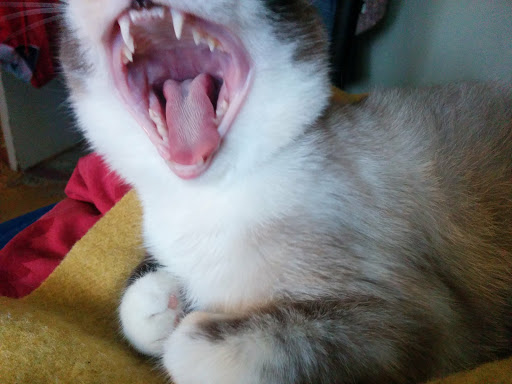 One thought on “Surrendering.”