I’d like to think that the universe is delivering this part of the country a chilly, somewhat dreary August to cheer me up about not being in Edinburgh for the Fringe. Even though I’m fairly sure that’s not how weather works.

I’ve actually only ever been to the Fringe twice, though they were (obviously) life-changing experiences (I mean, Norman Lovett WINKED AT ME). Both times, I went to most shows by myself; my flatmates the first time around were very strange and not that keen on going to live theatre or comedy. Or maybe I was the weird one for going to see a play called ‘The Curse of Iain Banks’, an author of whom none of them had heard.* 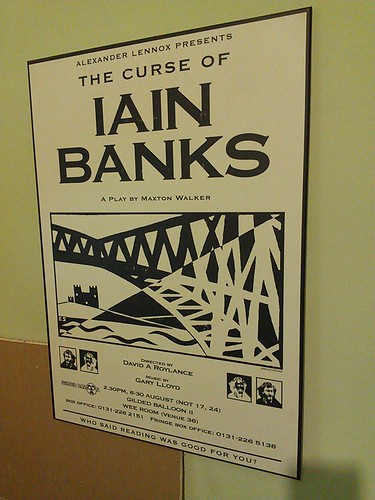 It wasn’t very good. One of the actors forgot his own character’s name.

At any rate, last time I was there, in 2008, when I wasn’t properly dry for a week because it rained so much (in Scotland! can you imagine!), I got an email from my boss asking me to come to a meeting (in a pub) around 11pm on the evening of my return. I told him the situation, namely that I was flying back and that I’d probably be exhausted. He added that he understood, but if I had any energy left, I should try to make it.

Turns out, my boss, who was about to return from an overseas posting (his wife was a diplomat), was going to be leaving the country again. Not only that, but the general manager was leaving (by mutual decision? I am still not sure) in two weeks forever. I was asked if I wanted the job, in front of a table full of coworkers, while in a dozy haze, and while coming off Edinburgh euphoria.**

I also said ‘I have no idea how to do bookkeeping’. I still don’t, really.***

A few days after this meeting, I got a phone call from my old boss (for whom I’d done some freelance work) asking if I wanted to take on a more exciting role. Well, ‘exciting’ in that it sounded borderline prestigious: Acting Managing Director of a non-profit (ex-boss was going on maternity leave) that was losing sponsors left and right.

It would have paid a lot more, but I had no urge to reboard a sinking ship, nor deal with a board of 21 people (with a president who didn’t care for me) and no staff back-up. Also, if they were calling me about it, then they were desperate, because I had only been an office admin when I worked there.****

Oh, and that bookkeeping thing would have kind of been a problem.

I said no, obviously.

It’s been an eclectic five years, to say the least. I have fallen into the dangerous trap of believing ‘Eh, this’ll do for know’ to ‘Eh, I don’t know what else to do’, which means I don’t challenge myself enough. I’m looking into training in…something else, but I’m not sure what. My skills are so peculiar, varied, and (probably) non-essential to most workplaces that a job hunt seems like a ridiculous, and terrifying, notion.

And I like my job. At least on the days where I’m not thinking ‘AGH I HAVE TO GET OUT OF HERE’, which are not *that* frequent and usually related to staffing issues (I don’t have children, so I can blame my grey hairs on employees – especially, but not only, those whom I fired). Since the boss has lived in town again, it’s been easier in many ways; I don’t get 3am phone calls now when the alarm goes off due to hobo interference anymore, for example. And he is on site to help with early morning rentals sometimes (though, he is much more uptight about them). I like that my workplace brings joy to so many patrons (even though the patrons might be responsible for more grey hairs than the staff). I like the low bullshit level, the lack of systemic office politics, and having results of my work in front of me, rather than waiting months to find out if things are working out. It’s really an OK place to be.

Five years is far longer than I’ve held any other job. Should I be celebrating? Should I be expecting some kind of lame Lucite-mounted Certificate of Not Being Driven (Completely) Mad? Nah. I’ll keep on keeping on until I figure out something else.

I really do need to ask the boss for a raise, though.

—
In other news, I am on Instagram! No, I do not have an account, but my junior kindergarten photo is on the feed for ‘The Ellen Show’. This photo has brought many people a lot of joy, so I only regret sending it in about 15% of the time.

*It’s probably the latter, even though two of them resented Scotland for not having whiskey sours readily available, SO THEY WOULD GO to the TGI Friday’s off Princes Street to get them. GAH.

**HOW is that the singular? Argh, English.

***Turns out my predecessor didn’t really either.

**** When I worked there, it was an office of two, with a biweekly visit from a bookkeeper and, if we were lucky, a summer student for two months a year. It folded about a year later, even though the person who took the gig was infinitely more qualified than I.