Things that I wish I had invented, part #792: Crash Course History.

(I will be watching a lot of the Biology ones too, because I never took it in school due to squeamishness over the mandatory fetal pig dissection.)

Yes, it’s basic, but that’s the point. History is not a priority in any public school system in North America. Understanding the past, and the history of other peoples, is key to general understanding of world politics and culture. If you need a starting point, these wee lessons are a good one.

On a semi-related note, yesterday, I was talking with an olde friend (in terms of length of friendship rather than actual age) about how ours was maybe the last generation to ‘need’ to travel and see the world as part of the process of growing up. (As in, who feels a need, not necessarily really needs, to travel to other countries.)

I’m not sure if we can generalize that completely, but I do feel like the folks a bit younger than I am are less inclined to want to spend a year learning German in Berlin or backpacking through SE Asia or even road-tripping across Canada to see other people in different contexts than their own getting on with life; it’s perceived as less essential in an age where you can get your news from Al-Jazeera from your phone on an OC Transpo bus.

Or maybe the younger people are just too broke because they’ve just bought a new iPhone that they can’t afford and are too busy Instagramming their lunches.

But really, everyone should have the equivalent of being stuck on a Polish train for eight hours, with frequent interruptions, without knowing what the hell is going on, while running out English-language reading material. Or getting tipsy on beers with unpronounceable names with almost-strangers from Australia. Or staring down a great work of art or temple or mountain that, previously, you’ve only seen on Wikipedia (or, in my case, National Geographic).* 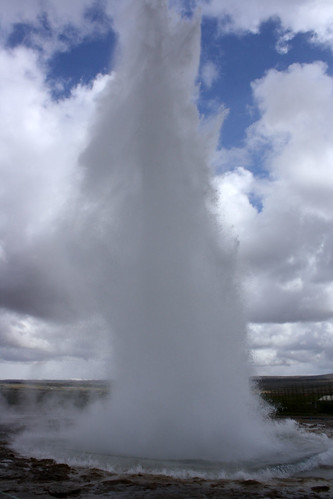 At Geysir, where those suckers get their name.

Or perhaps I’m just old and wishing I had been more adventurous in my youth and fed up with not being able to live vicariously through younger folks’ travels.

* I don’t necessarily recommend the ‘getting malaria’ route to understanding the world, which a few of my friends have, but another friend’s story about screaming bloody murder after spotting a giant millipede on his very first day in Japan never fails to make me laugh and laugh, though.