I haven’t done a flood update in a while. A lot happened in the last couple of weeks (you can check out my Twitter feed for the many, many teeny updates, including exclamations from the morning Hamish peed on a hotel bed because his litterbox was inaccessible), but I haven’t really felt like sitting down and thinking about it; the news hasn’t been truly terrible or anything, but I got so overwhelmed with the zillion little details that almost all my free time was spent doing important things like a) staring at walls in the hotel, b) watching ‘Match Game’ and endless reruns of ’30 Rock’ and ‘Robot Chicken’, and c) pretending that I will have a pile of money drop from the sky, solving many of our house’s myriad problems. Because I’m a grown-up who is really good at facing problems head-on.

(I also read three and a half books in the space of five days, then read nothing else in the following fortnight, and wrote most of a sketch about coulrophilia (be careful Googling this, especially at work.))

But, I listened to an episode of Professor Blastoff yesterday (big surprise) about Writing and (re-)found out about this website called 750 Words that helps Morning Pages-style to keep you writing. SO I AM WRITING BECAUSE I LIKE GADGETS.

Also, because I need creative outlets. Which was made clear by deciding to paint the kitchen trim purple (sorry, ‘Blueberry Pie‘), then using some of the 2/3 gallon left over to paint the inside of a manky old pantry that wasn’t being used for much except housing a really spectacular tinned pineapple explosion stain.

(Then, of course, you need to have the coordinating 1950s housewife contact paper, right?)

I’m pretty pleased with it. And it provided a nice, but back-aching, break from the endless sorting of craps.

See, we moved back into the house on Thursday.

Hamish summed up our feelings about dealing with this development by hiding behind the microwave and being bitey. 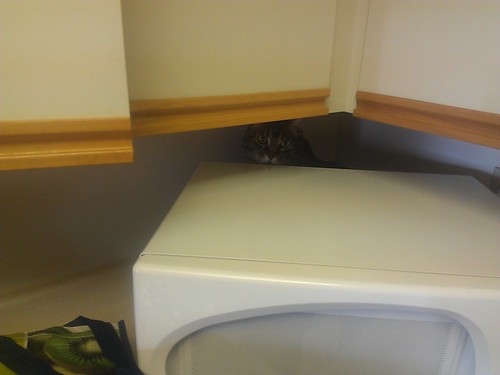 He then evaded attempts to photograph the car ride. 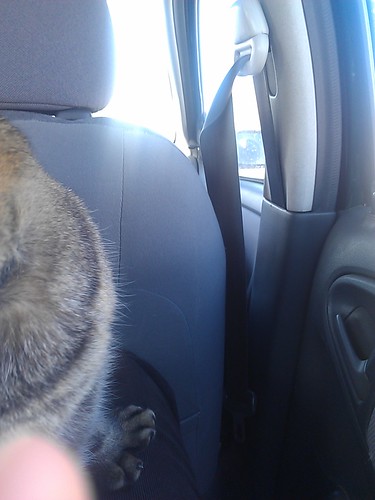 Our house was already full of crap, but it’s is never more evident how crappy said crap is when it’s packed up by baboons who have only a vague sense of how things work. How else can finding our Cuisinart’s base, bowl, and accessories in three (four?) different boxes be explained? Or why the most essential items (like plates) were in boxes at the bottom of the pile, in the furthest corner from our reach? Or the fact that our cutlery tray was in the bottom of a box of miscellany, including a burst-open packet of soup?

We also have five teapots. How did I miss that? Who needs five teapots? Or thirty coffee mugs (it’s a two-person household)? Or this?

Adding to the mess is that our kitchen was a mess; our cupboards came down grubby with grease and dust, and went back up that way (with additional plaster particulate). I wanted to make sure that everything was ridiculously clean before we put things away, which, when you don’t find your teatowels for two days, nor your dish rack for four days, is quite difficult. Y’all, I know it’s not good for man, nor beast, nor river, but take out stock in Comet’s parent company. We’re going through a lot of that stuff.

One mess that I was most worried about? Our fridge got unplugged. Rather, it was moved to the dining room and when they turned breakers off before smashing down walls, they forgot to turn them back on.

It contained a lot of food that would have been questionable (or worse) by the time we moved home, but, post-power loss, everything needed pitching. Luckily, the contractor did notice the mistake and cleaned it for us. Well, threw out everything (including our seltzer bottle! dammit!) and wiped it down. I cleaned the hell out of it (almost literally – I nuked a syrupy thing that might have been Gozer’s afterbirth), cursing the sadist fridge designers who decided ‘the more grooves, the better!’*

Have I mentioned that I am not a naturally clean or tidy person? Far from it. But I will NOT put something into a dirty space, nor put away a dirty thing. My brother is less persnickety about this; a wipe will do for him most of the time, but for difficult things, he will ‘soak it’ (forever, until the bottoms of pots rot out, Simpsons-style). I will, however, scald my hands (and bleach them to boot) to scour something to pristineness when given a chance. Ultimately, after the 70th time I bit his head off and/or recleaned something, he realised that his place was in the basement, not the kitchen. The basement is shaping up really well, though, so that’s cool by me.

So, yeah, I have not been pleasant to be around. Uterine Turmoil sure didn’t help, nor did frequently forgetting to eat. (Apologies again to R., who got my full wrath of low bloodsugarness on Friday. Ugh. I was a total Lucille Bluth.)

But! Things are progressing and regressing. The upstairs sink, which was running slowly before all this went down, is clogged completely now, but leaking out of two wee holes inside the (as yet unrebuilt) wall. This is unrelated to the pipe replacement, except that the wall demolition probably had something to do with the two wee holes. Yay. The plumber’s back tomorrow to deal with it.

The hotel bill was fucking astronomical, but, apparently, I’m being cut a cheque this week. I’m using a tiny bit of that to go to Kingston to see a comedy show, take some time to stare at a lake, and write some.

The floor is not installed in the kitchen yet, because we didn’t actually choose one until Thursday and, despite my emailing the contractor to say ‘Hey, will this work? If so, I’ll order Saturday’, I didn’t hear anything until Monday night, so, yay, more delays. To be honest, the subfloor kinda looks better than the shitty tile that was there before. We could/should just shine that plywood up.

Highlights from the last little while:

So, there’s my disjointed update. I’m finally starting to feel more human again, after a long time of ‘I AM FIT FOR NOTHING AND NO ONE’. Just in time for a work onslaught and publication deadlines.

Ah well. At least I have a kitchen. And a clean fridge. That has beer in it for drinking while doing more cleaning tonight. Things could be a lot worse.

3 thoughts on “The Seaward.”