Overheard one week (less a day) ago on a highway in rural New Brunswick:

“So far, the only musical disappointment on this trip is that this isn’t the David Lee Roth version.”

(Holidailies #13. And yes, I missed a day. again.)
Yesterday was full of snow shovelling, trivia, and drunkenness (though not all at the same time). Today is full of muscle exhaustion, data entry, and recovering from drunkenness. END_OF_DOCUMENT_TOKEN_TO_BE_REPLACED

Just a quick one today, as I’m off to a trivia thing. Well, two trivia things in one, since we’re doing the British Open as well. Not feeling great about either. I can’t remember what I had for breakfast yesterday, let alone…well, anything British quizzers would be expert in. More cricket? Plotlines to ‘Only Fools and Horses’? Who designed which cathedral in whatever little-known-to-foreigners town in Yorkshire? END_OF_DOCUMENT_TOKEN_TO_BE_REPLACED

Whoops, in my fog of knitting and getting weepy at ‘Six Feet Under’ all weekend (my family has died a lot), December happened. And that means Holidailies. Which means writing daily. I didn’t notice, and therefore missed day 1. Nice work, me.

I go through bouts of updating this space every day for months at a time, but I haven’t been writing much of anything lately. My brain feels less burst-y than usual, so I don’t feel the urge to purge my brain of thoughts as often lately. Especially unfortunate as I went to a writing workshop last month, then missed the meeting last weekend due to lack of social strength (had two other Big! Social! Events that weekend and I was very tired) and material (we were each supposed to write two sketches in the space of four weeks and I totally failed).

So, again, as I see mediocre comedians on panel shows, or hear about acquaintances winning prizes for their work, I dream of a day when I have it in me to complete…something. Hard work is more important than constant inspiration and waiting for the right moment, I’ve been told ad nauseam.   END_OF_DOCUMENT_TOKEN_TO_BE_REPLACED

‘I’ve had to learn and discipline myself that I’m much happier and much less depressed if I give myself a project. It’s just that simple.’ – Nick Offerman

When I was 10, my mother took me to see the Molly Ringwald teen pregnancy scarefest For Keeps to show me that I shouldn’t get knocked up before I was ready, but didn’t like us watching ‘The Jetsons’ because she felt that it was ridiculous and offensive that Jane’s ‘job’ was to take her husband’s money and go to the mall, nor ‘The Flintstones’ because Fred was a big liar, and that that was no way to behave in a marriage, and that lying was a step down from killing on the moral scale.

I was reminded of this today because of Rob Delaney’s piece on rehab, and how effective the 1980s messages of ‘hard drugs could really, really kill you dead right quick’ (paraphrasing, obviously) were to him, and to me, and how ridiculous stubborn my brain has been in not being the slightest bit malleable on many counts since my preteen days.

Of course, my mother was human, and fallible, and I needn’t have held on to these things with such subconscious ferocity, but I have tons of other more important failings to worry about instead.

Three days off means this is a hasty entry indeed because I have work (!) to do.

Posted this on FB earlier:

In previous years, the national services to commemorate Remembrance Day included speakers and large screens so the people in the crowd could see and hear what was going on. Not so this year. Was closer than usual and could barely make out when people were talking, let alone what they were saying. Not good.

The cynic in me is almost positive that they went cheapo next year because Harper and his band of Not-So-Merry-Men are planning a very expensive WWI-apalooza for next year that will make all the over-the-top 1812 nonsense look…well, even lamer.

It’s not just cynicism fuelling this, but a very real belief, and worry, that people are going to be just as eye-rolly when the four-year ‘celebration’ of banners, colourised coinage (seriously, can we fucking stop this? they are awful), virtually contextless ‘advertising’/PSAs, and other cheap-looking nonsense come up. Oh, and that the Conservatives really are convinced that history is something that is, or, at least, should be presented as, black, white, and linear, (and potentially money-making) rather than a nuanced web of information to be explored (and shared freely).

I am 100% pro-commemoration, obviously, and I guess any additional history learnin’ is good, but trepidation reigns supreme right now.

And with that, I’ve probably ruined my chances of a job in government until Dude steps down. Doh. I did want a pension.

Took a two-day break from the news, work (save for one phone call, grr), and, apparently, writing this weekend in favour of biking in snow, cooking and eating things, and lots of knitting. One baby birthday-related project was completed early this afternoon. Wasn’t ready to make a second yet, so I made myself a giant hipster cowl instead. 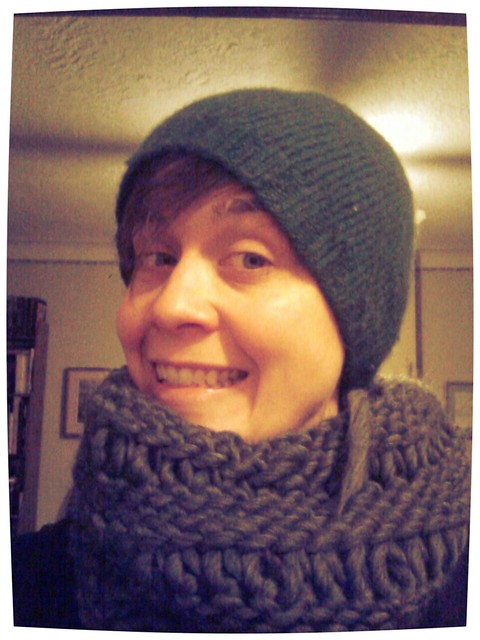 That’s a mega-natural smile. I even added a slightly Instagram-esque filter for extra Hintonburg. I did not, however, finish weaving in ends before throwing this sucker on, though. Doh.

Not bad for an afternoon’s work while watching QI reruns and eating stew, eh?

About 48 hours ago, I decided to take Friday off. Rather, I decided to float the idea of taking it off with my boss, who agreed that I’m not always THAT vital, especially since Paul the Projectionist would be around to run the press screening. END_OF_DOCUMENT_TOKEN_TO_BE_REPLACED